I discovered something I’d like to share with you: For the entire month of November, I documented every meal I ate and every workout I did, along with other details, and I posted weekly updates publicly here, and along the way, I discovered something pretty cool. I didn’t have any specific goals of muscle building or fat burning, I simply wanted to share an inside look into the life of a vegan athlete, meal by meal, and workout by workout, with full transparency.

Though I didn’t have specific goals, I wanted to maintain my roughly 200-pound size, while also getting a bit leaner, coming off a few months of inactivity in late spring and most of the summer due to an injury. I decided to document all of my health and fitness actions for an entire month to help readers understand what I do on a daily basis to maintain muscle size and strength as a 21-year vegan athlete, currently aged 36 years, but I also did it to help keep myself accountable. You see, I know the power of documenting actions honestly and transparently, because I have done this many times during my bodybuilding career – and while I was a competitive distance runner. I also know full well what can happen if I conveniently avoid acknowledging what I am eating, and carelessly remain clueless of my actual activity level. When I eat poorly for a period of time, and avoid exercise, naturally, I want to forget about these actions, as if they never happened. The problem is our bodies don’t forget about our careless actions, and those actions have health and fitness consequences – whether we want to acknowledge or admit that or not. Like undesirable actions, positive actions produce results and outcomes too. Discovering more of those helpful actions is one key to health and fitness success.

While I was spending part of spring, all of summer and part of fall recovering from a torn disc in my lower back and a case of sciatica on the left side of my entire lower body, I reached an all-time high in body fat and body weight. I peaked at 207 pounds with 23% body fat, exactly three times the body fat percentage I had when I was a competitive bodybuilder at 7.8% body fat. I could still flex and display a level of muscle size, especially from favorable angles, but I found myself in a position I had never been in before: out of shape. Taking nearly half of 2016 off from exercise (and healthy eating) took a toll on me mentally, emotionally, and physically – likely in that order.

Though I am the author of a bestselling book about burning fat and building muscle on a whole-food, plant based diet (Shred It!), I stopped following my own advice because I was feeling down. I was in a lot of pain and wasn’t able to exercise. I got frustrated and didn’t want to lose a bunch of weight after working so hard to build from 165 to 205 pounds over the course of 18 months, following a year of distance running, so I kept eating a lot, even though I wasn’t exercising. And I wasn’t exclusively sticking to whole foods. I was in the process of moving to a new state, buying a house for the first time, and was recently engaged, and I allowed myself to feel pretty stressed out. Consequently, I ate a lot of frozen vegan meals. I loaded up on Amy’s frozen foods like vegan burritos, mac ‘n cheese, Thai noodles and curry, and more. I prided myself on the fact that I maintained my 200+ pound frame, but then I experienced some new territories as a result of my enthusiasm to maintain weight. Clothes stopped fitting – everything from boxers that had their elastic band stretched and ruined, to size large and even a few XL shirts that just wouldn’t fit anymore, including some that used to be baggy on me. I literally went from being a 165-pound distance runner to a 205-pound weight lifter in less than two years, and then a few months later I became a 207-pound inactive person. My clothes changed as fast as my mood, and it was a challenge unlike anything I have gone through. I was still on tour and still trying to spread the vegan fitness message, but I didn’t feel comfortable with myself, knowing I had abandoned my own advice and I was suffering internally and externally. It was time for a change. Enter the November Project.

I thought of the November Project one day in late October while I was sitting in the sauna at the gym. I had been pain-free for most of September and for all of October, and since I was training 4-5 days a week again, I figured it would be interesting to share my training and nutrition programs with others. I was basically starting over, only doing cable and machine exercises, but I was being consistent again, and my diet was starting to get back on track too. I was motivated, happy, and feeling positive again for the first time in a while. When I was required through my own discipline to document all of my actions, it was really eye-opening to see what I was really eating on a daily and weekly basis, and how often I was actually exercising. By documenting these actions, I was able to alter my meals to focus more on whole foods, while avoiding certain processed foods, and I could gauge my activity level and boost it at any time if I felt the need to burn more calories or build more muscle. I also discovered some secret weapons, like using the Stairmaster for an hour at a time, performing fasted cardio, burning 500 calories during a single session, creating puddles of sweat on the machine, while simultaneously melting off fat and toning muscles. By documenting all of these things, I was able to change my health, fitness, and my mood in a very short amount of time.

My journey is still a work in progress, and I continue to do rehabilitation exercises for my back, and I am still working on including more whole foods into my diet (especially salad greens), while eliminating as many processed foods as I can, fighting addictions along the way.

Since I was documenting all of my meals and workouts for all of November, and beyond, I took various food and fitness photos weekly, if not daily, especially with the food photos. I was looking through my phone today to select some photos to promote our new No Meat No Problem clothing, and I scrolled past many of my fitness photos from the past 6 weeks. Here are some of them to show my work in progress: 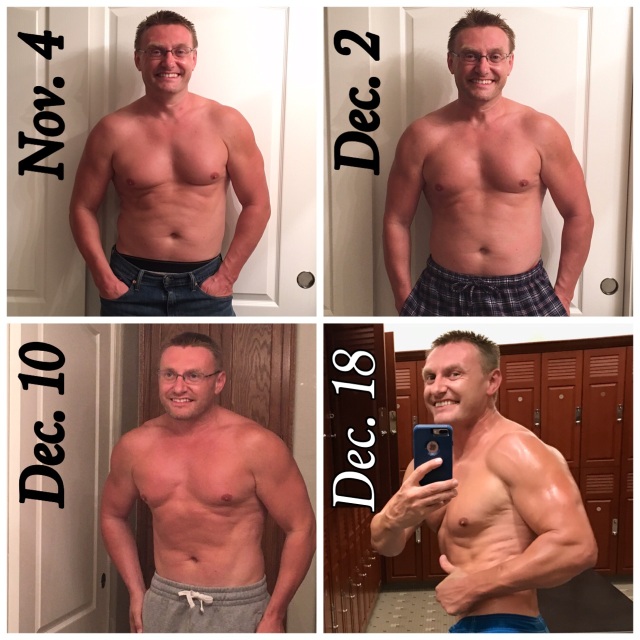 In an upcoming newsletter (click here to sign up for our mailing list), I will be sharing the most important lessons I have learned during this ongoing transformation, as well as my absolute best suggestions from what I’ve observed during my own journey (such as using the Stairmaster as often as possible for fasted cardio, starting every day with water before consuming any calories, and going out of my way to eat nutrient-dense foods such as leafy green vegetables and a variety of fruits – while keeping processed foods out of the house so they are not temptations that can limit progress).

Thank you for reading.

I’ll be in touch again soon with a full recap of the November Project, sharing statistics, highlights, struggles, and lessons learned. It’s amazing how much can change in a short amount of time when you’re being honest with yourself, even if it’s hard to face reality. I encourage all of you to document your meals and workouts for a single week to see how much you can learn about yourself. How about January 1-7? I’ll do it with you, and we can share notes.